BARLINEK FLOORING IS COMPLIANT WITH US EPA TSCA TITLE VI

Barlinek supports ecology and is involved in activities which help to save the natural environment. As we run our business responsibly, we know the importance of how we treat the environment which surrounds us, which is why we try to actively influence development of the ecosystem we all live in.

Forests are one of the typical characteristics of our country’s landscape – they cover 29% of its area. They provide a haven for thousands of species of animals and plants, protect the soil against erosion and their beneficial influence on all of us cannot be overestimated. Thanks to forests we can breathe fresh air, relax in natural surroundings and enjoy close contact.

From concern for the good of future generations and to maintain forest resources in the best possible condition, they are systematically renewed and enlarged. Since 2000, the Barlinek Group – the largest manufacturer of wood floors in Poland and one of the world leaders – has been very actively involved in this action.

The inspiration for the company’s scheme, known as the 1 for 1 Principle, was to compensate nature for the valuable raw material which is the wood used by the company to manufacture its products. Thanks to Barlinek’s initiative, there are now nearly 15 million trees growing.

The scheme involves the company co-financing the purchase of saplings in exchange for every pack of Barlinek floorboards bought by customers. The first sapling planted in the project put down its roots in the Bogdaniec Forest Inspectorate in Lubuskie province in 2000. In the course of last year’s planting campaign alone, Barlinek Customers Forest expanded by over 1.5m trees saplingss, with the vast majority of the trees co-financed by the company in Poland. The company has financed 100,000 saplings in Ukraine, in the Vinnitsa and Ivano-Frankivsk areas. 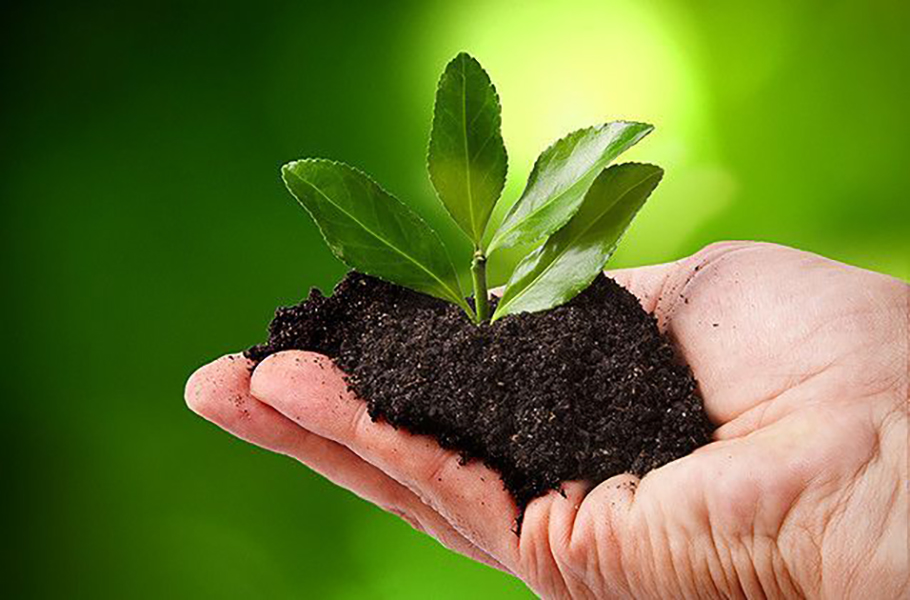 The “1 for 1 ” scheme covers forestry inspectorates in 4 provinces – Lubuskie, Western Pomerania, Pomerania and Wielkopolskie. The programme has been conducted in Ukraine since 2007, and nearly half a million trees have been planted there so far. The most recent addition to the programme is Russia, where Barlinek can boast of a legacy of 137 thousand saplings.

Barlinek’s Customers Forest is systematically expanding. Some of the trees growing there are ten years old and new ones are constantly appearing. So the company’s customers have reasons to celebrate. Firstly, they can enjoy their beautiful, natural wood floor, and secondly they are aware that thanks to them, trees are planted for future generations to enjoy. 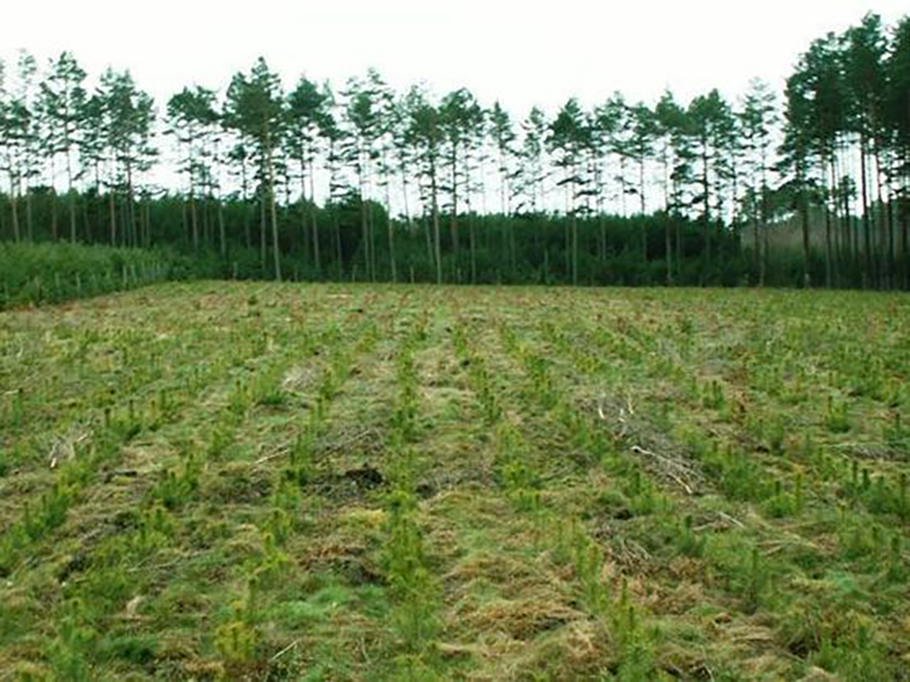 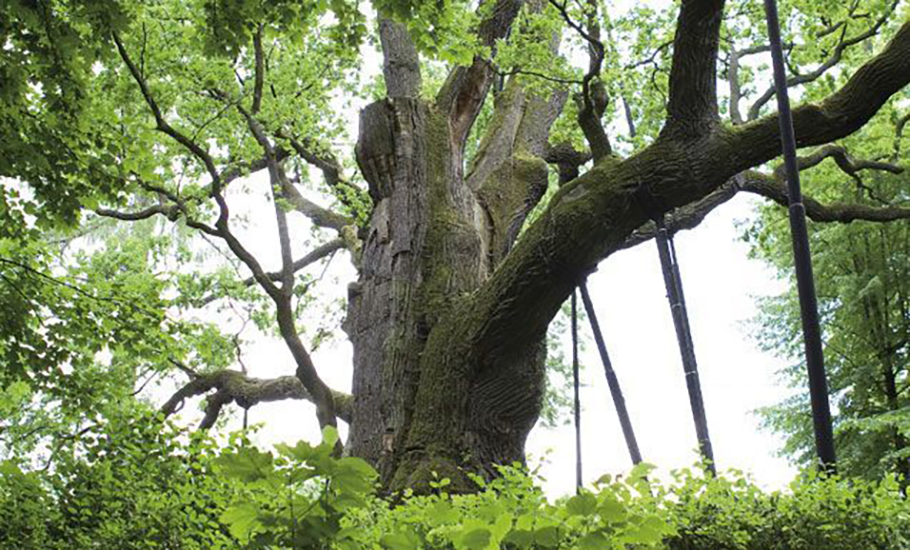 The tree is shrouded in many legends. According to one of these, Bolesław Krzywousty himself rested under Bartek. Another claims that Jan III Sobieski, returning from the Vienna Campaign, hid a bottle of wine, sabre and Turkish matchlock rifle in a hollow. 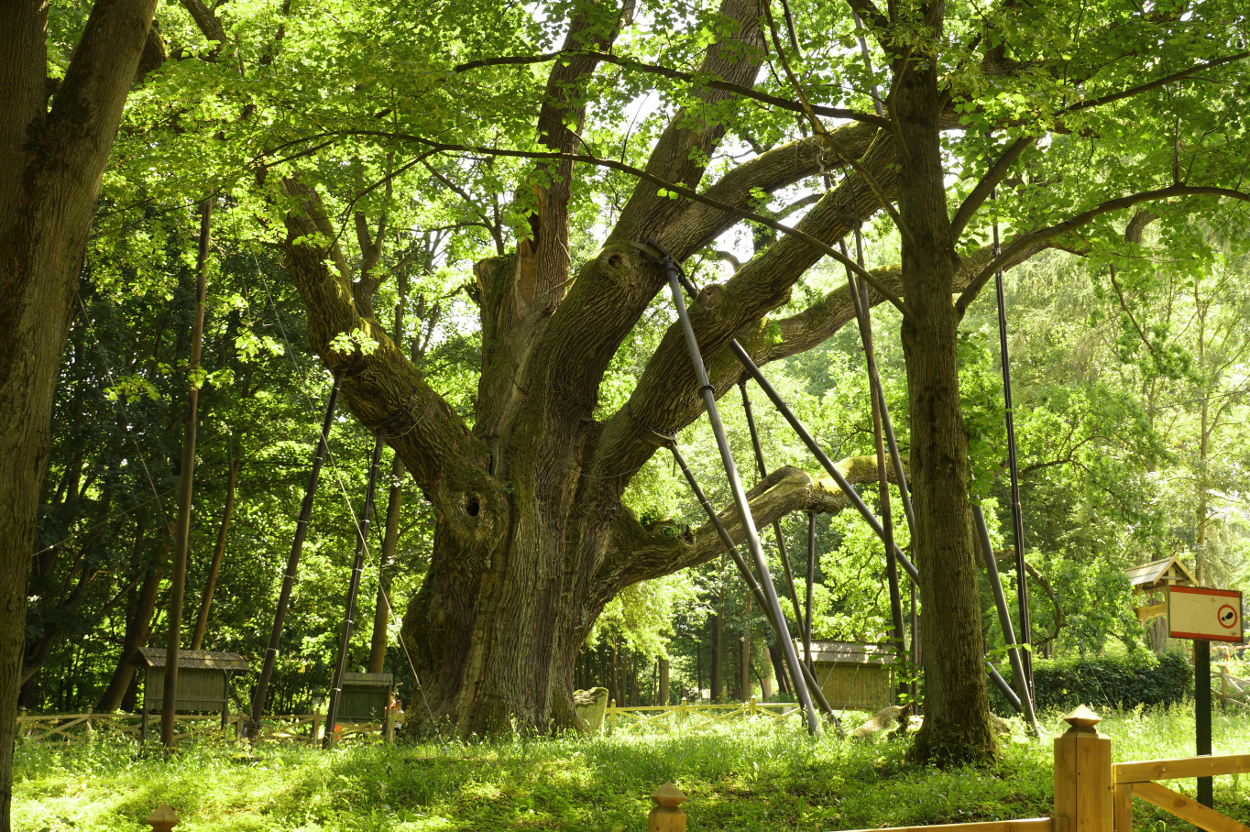 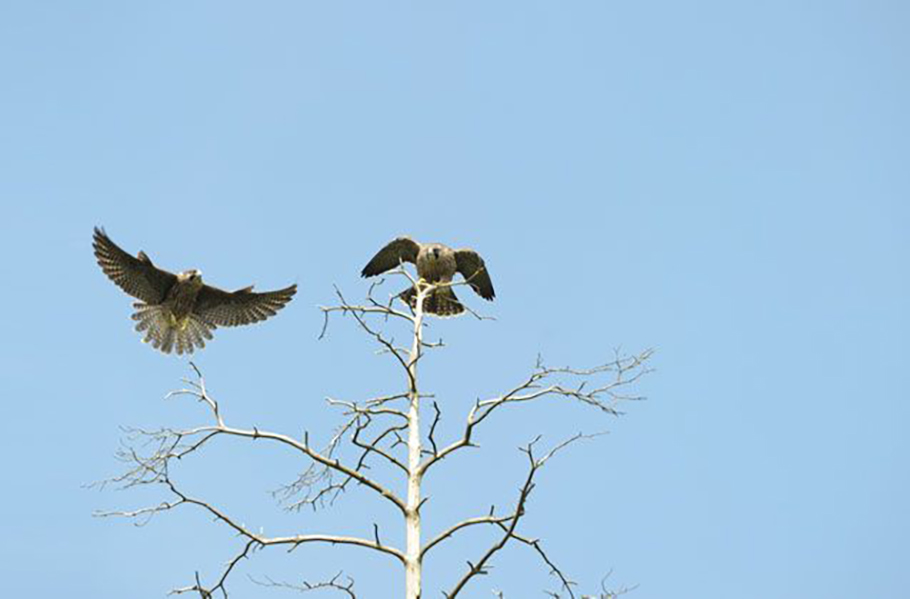 The birds’ wardens take care to ensure that the young are brought up in conditions as similar to those in nature as possible. The next stage is to hang special baskets with the young on trees somewhere in the heart of the Barlinek Forest. The birds sit closed inside for two to three weeks, before their wardens open the cages. At first the young falcons feel uncertain in the bosom of nature, and some of them remain in the baskets for some time. Others fly around the spot where they have been released, not daring to venture further. The young are fed and monitored until they become completely independent, which usually takes three weeks. All the birds are ringed so that they can be observed in future.

The vast expanse of the Barlinek forestry inspectorate seems to be perfect hunting terrain for peregrine falcons, and provides excellent conditions for them to nest in the treetops. The birds’ lifestyle means that observing them is not easy. Falcons regularly change their hunting areas and often fly across our western border. Several of the falcons bred as part of the reintroduction programme are currently nesting in Germany. 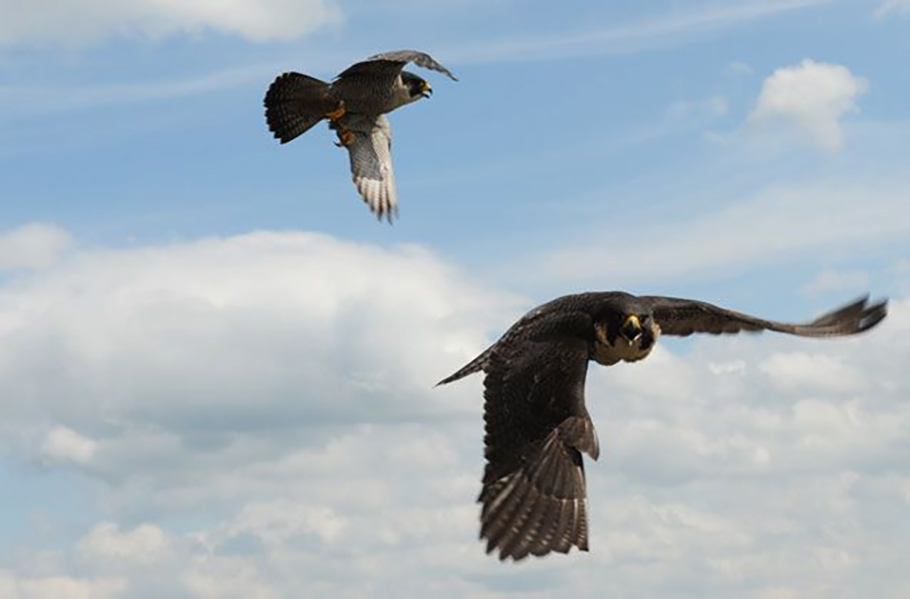 The process of almost complete extinction of the peregrine falcon began in the 1960s in Poland and throughout Europe. The population was destroyed due to the chemicals used on a large scale at that time to protect plants, which accumulated in the birds’ bodies. The toxins disrupted the falcons’ calcium balance, weakening the shells of the eggs they laid resulting in them being crushed by the females incubating them.

In the face of a catastrophic fall in the population, intensive work was undertaken on rearing peregrine falcons, and then on ways of reintroducing them to the wild. One of these, involving the use of artificial nests and known as the test-flight method, is used in the Barlinek forestry inspectorate.

The vast forested areas satisfy all their needs and offer excellent conditions for development. Falcons choose treetops as sites for their nests, but sometimes when they are driven from the forests they settle in habitats which are not natural for them, such as on the chimneys of abandoned factories or the roofs of tall buildings. 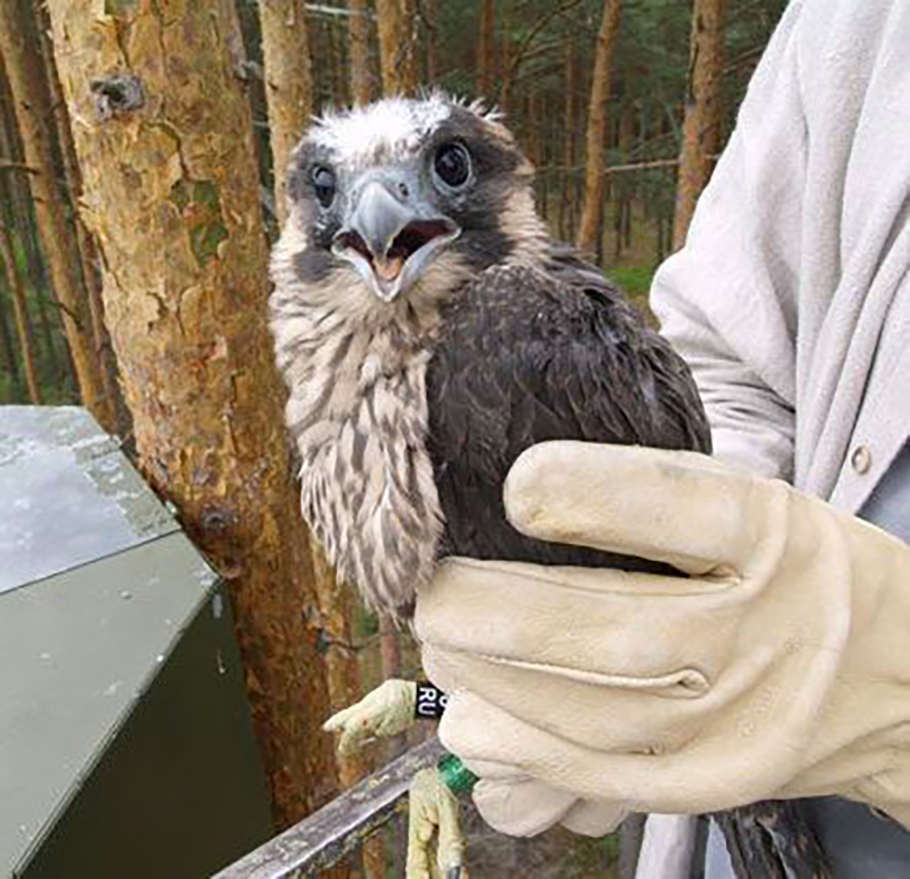 I agree for the storage of cookies on the device I am using as well as for the processing of my personal data left during browsing the products and using services provided via electronic means under Barlinek website, including information and other parameters saved in cookies for marketing purposes, including profiling by the Companies of Barlinek Group.
Nie sprzedawaj moich danych osobowych.
Cookie settingsACCEPT
Manage consent

This website uses cookies to improve your experience while you navigate through the website. Out of these cookies, the cookies that are categorized as necessary are stored on your browser as they are essential for the working of basic functionalities of the website. We also use third-party cookies that help us analyze and understand how you use this website. These cookies will be stored in your browser only with your consent. You also have the option to opt-out of these cookies. But opting out of some of these cookies may have an effect on your browsing experience.
Necessary Always Enabled
Necessary cookies are absolutely essential for the website to function properly. These cookies ensure basic functionalities and security features of the website, anonymously.
Functional
Functional cookies help to perform certain functionalities like sharing the content of the website on social media platforms, collect feedbacks, and other third-party features.
Performance
Performance cookies are used to understand and analyze the key performance indexes of the website which helps in delivering a better user experience for the visitors.
Analytics
Analytical cookies are used to understand how visitors interact with the website. These cookies help provide information on metrics the number of visitors, bounce rate, traffic source, etc.
Advertisement
Advertisement cookies are used to provide visitors with relevant ads and marketing campaigns. These cookies track visitors across websites and collect information to provide customized ads.
Others
Other uncategorized cookies are those that are being analyzed and have not been classified into a category as yet.
Save & Accept